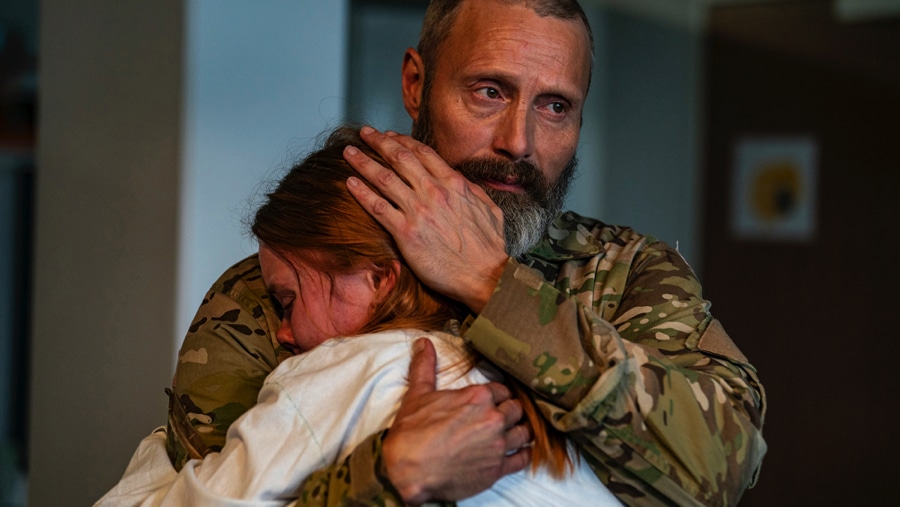 When a woman is killed in a tube explosion after Christmas shopping with her daughter, it takes a maths geek to work out it was no accident, and her soldier husband to seek revenge on the perpetrators.

Billed as a dark comedy – Riders of Justice is certainly Noirish: but this time it’s a group of amateur sleuths who set out to solve the crime, rather than grim-faced Danish policemen. Best described as absurdist rather than out and out funny, Riders reunites the director with the homegrown all star cast of his previous black comedy Men & Chicken (2015). This time around Mads Mikkelsen plays a poker-faced soldier Markus forced back from a war zone to avenge his wife and heal the rift with his distraught daughter Mathilde (Gedberg).

Markus clearly has his work cut out tracking down those responsible for the tragedy – the so-called ‘Riders for Justice’ –  but managing an unruly crew of citizen crime-solvers joining him on the mission is even more difficult. Madcap mathematician Otto (Lie Kaas) and his unhinged colleagues Lennart (Brygmann) and the pot-bellied Emmenthaler (Bro) are totally unsuited to the job, so much so that Mathilde confuses them with bereavement counsellors sent by social services.

In the noirish shadows of a Danish December (filming took place in Odense) there is conflict on all fronts as the miss-matched task force sift through the evidence, totally at odds with each other, and out of their depth in a professional capacity. Finding the perpetrators of the original crime eventually becomes more and more unlikely. Meanwhile Mathilde and Markus clearly have issues that threaten the emotional overload.

Is Riders amusing? There’s an absurdist thrill to the idea that humour can be found in life’s most dreadful tragedies. And in some respects the film is refreshing as it satirises family conflicts, euphemisms surrounding death and traditional approaches to crime-solving, and these must be taken with a pinch of salt. The personal and situational conflicts provide the film’s ludicrous streak so Riders never slips into mawkish territory in the family scenes with Mathilde and her friend Sirius. Markus’ stony-faced butchness constrasts well with Lennart’s overwrought timidity and Otto’s analytical weirdness. The weakest character is Emmenthaler who just seems to swear and shout.

Eventually the men get a result, although not necessarily the one they intended, but that’s very much the point of the Riders of Justice – it’s the ultimate antidote to terrorist thrillers. MT