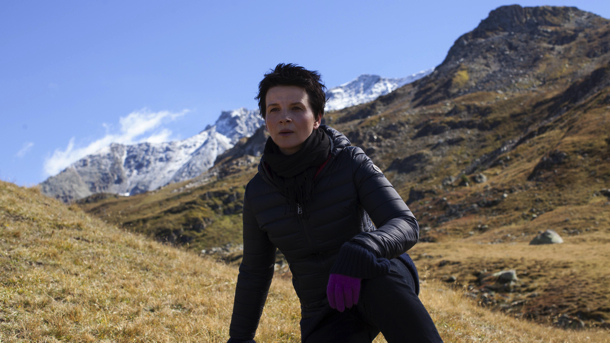 One often forgets that Olivier Assayas’ career as a director/writer is two-dimensional: we like to remember serious examples like Après Mai, Fin; Août Début Septembre or Les Destinées Sentimentales – but have to admit that he is also the master of “schlock” films, sensational outings like Demonlover, Irma Vep and Boarding Gate. CLOUDS OF SILS MARIA falls between earnest refelctions on the topic of ageing and campy exaggeration, with a little bit of ageism thrown in.

Maria Enders (Isabelle Binoche) an actress in her forties and in the middle of an acrimonious divorce, is facing an artistic choice: to play or not to play in a London theatre production of ‘Maloja Snake’, the film version of which made her a star at the age of 18. The snag is that Maria would have to play Helena, the older woman in a lesbian relationship, opposite the youthful seductress Sigrid, Maria portrayed in the film. Her young PA Valentine (Stewart), seems to push her to accept the role, and after the playwright of the ‘Maloja Snake’ dies in his home in the Swiss Alps, just before Maria is going to accept an award for him in Zurich, Maria meets the director of the London production and agrees – with reservations – to take the part. In Zurich, she also meets an old lover/adversary, Henryk Wald (Hanns Zischler).

The main part of the film describes the rather puzzling relationship between Valentine and Maria, who move to the Swiss Alps to rehearse the play and watch “Maloja Snake”, a natural phenomena which is the spiritual source of the film/play. We are never sure of the exact nature of the relationship between these two women – is Valentine the usual ‘Girl Friday’ or is there more emotional involvement than meets the eye. Maria and Valentine then meet Jo-Ann Ellis (Moretz), a young American actress, who is cast to play Sigrid; we see her in clips from a turgid ‘SF-Film’. The cast thus having gained Jo-Ann, suddenly loses Valentine, who disappears during a outing with Maria in the mountains. No explanation is given – and Maria moves to London with a new PA and starts rehearsing, whilst Jo-Ann and her lover face the attempted suicide of the latter’s artist wife.

CLOUDS OF SILS MARIA seems to be two films fused together: it is dominated by the enigmatic relationship between Maria and Valentine: the bookends represent rather tepid shock values, when Maria’s past is dissected, and Jo-Ann’s appearance brings some involuntary humour into the proceedings. But there is an undercurrent in this film, which leaves a bitter aftertaste. Not enough that Maria is torturing herself with the question of playing the older woman – she joins Valentine for a totally unnecessary swim in a mountain lake where they are dressed for the freezing cold. The naked Maria and the sparsely clad Valentine are used for a physical comparison the film could have done well without.

Whilst Binoche is impeccable, Stewart and Moretz act like the fish out of water they really are here. The camerawork is often too glossy, showing postcard idylls of the mountain landscape, accompanied by pompous music. Somehow Assayas has not made up his mind if he wanted to make a serious mid-European art house movie, or a flimsy would-be Hollywood product (pandering to the American film market); the latter interpretation underscored by the fact that all the main European characters communicate in English. AS